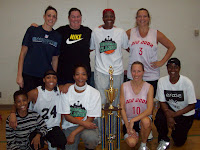 AWU (all washed up) returns for their 3rd Reignman Tournament championship title.

The Peace.Love.Basketball Shooting Challenge registration has ended. Of course that doesn’t mean it’s time to quit shooting, there are a few weeks left of summer. I hope everyone is out there having fun and getting their shots in every week. Charli is about half way there, Cass is about a third of the way and I plan on catching Charli this week.

I’m in the design process with the shirts so if you have any request on colors, please comment. The shirts will be shipped mid August. Enjoy the rest of your summer and keeping shooting!

I wish that I could say I shot 500 shots for the PLB Shooting Challenge this week. But I didn’t. I wish I could say I washed at least some of the dirty clothes piled around my house. But I didn’t. (Just ask my husband) I wish I could say I cleaned the bathroom. But I’m guessing by now you know the answer… I didn’t. But I did get to hit the basketball court with a bunch of kids. What could be better than high-fiving a 5 year old who sunk his first basket. To see his eyes open wide, for a split second, shocked that the ball actually went in. His mouth open into a wide smile, cheeks raised high, as he looked around unsure of what to do. “Give me a high-five man!” I said, reaching my palm out so he could slap it. Basketball and kids…a perfect combination! The chores can wait…

Cass got the bad draw today…his mom. 2 on 2 has never been my game, I like the freedom of the full court. The opportunity to run and blend with my teammates on the hardwood, not trip over the bumpy grass/driveway court. Still I had fun. Even after a 14-15 loss to Charli & Dad, I had fun. (We’ll get’em next time Cass, not that winning is that important, but it’s nice every once in a while)

Three more families have joined the Peace.Love.Basketball Shooting Challenge and over fifteen kids. Don’t forget to let me know how you’re doing. And get out there and have fun!
Best of luck!

Well, both kids passed me quite handily on their shooting charts. It doesn’t hurt that they have had me as a rebounder. (how can I resist a “mom, can you come out and shoot with me, please?”)  It doesn’t even bother me that I end up rebounding. In fact, I enjoy it. I didn’t realize starting the Peace.Love.Basketball Shooting Challenge would bring me even closer to my kids.

I wasn’t sure they would want to do the Challenge. But Cass ran out to the hoop the first day, shooting 40 shots before we walked to school. Charli knew about the PLB Shooting Challenge but she didn’t really say much, other than briefly commenting about having her picture on the small handout I was making about the Shooting Challenge. A comment that was as difficult to read as her opinion on the Challenge itself. I was preparing for, “I don’t really want to do it mom.” And had decided not to push. I’ve seen way to much of that in my years of coaching and I’ve seen what it can do to girls and their love of the game. “Sonya you’ll have to ‘let it go’ if Charli doesn’t feel like doing the Challenge” I told myself.
Yesterday Charli asked, “Hey, why don’t I have a shooting chart taped on the wall for me?”
“I didn’t know if you wanted one.” I said, dropping the last dirty fork into the dishwasher.
“Yes, I want a chart.” she said grabbing a ball and heading to the court.
I smiled as I filled the dishwasher with soap and closed the door.
Never mind that she shot in her bare feet the first day. Never mind that she decided to go with shots taken, not shots made. She’s out there shooting, having fun. And better yet, part of the time, I’ve been out there with her. I’ve been keeping quiet and keeping it fun. Well, maybe I’ve let out an occasional “don’t forget to square your shoulders to the hoop,” how could I not. But I’m staying quiet enough that she’s smiling and now she has passed me by about 300 shots. I’ve got some work to do tomorrow…