When I was coaching I gave journals to all of my players and to the kids who came to our summer camps. I found that writing was a good way for them to set personal goals, learn about team concepts and discover things about themselves and each other.

Some players cherished their journals and even brought them home and used them on their own throughout the season. Others simply left them in their lockers for the times when we had organized writing exercises and goal settings. But I loved that every time we wrote in the journals, noses went straight to the page and pens where scratching away. The girls had things to say, thoughts to be written. I believe that all the players and campers benefitted from the experience in one way or another as it gave them the opportunity to delve into their thoughts on the importance of teamwork, attitude and work ethic, and also gave them a space for personal introspection and self-evaluation.

For the high school teams, I had the players write down basketball goals as well as some life goals, and then I tried to give a variety of thought provoking writing prompts. I used questions like: What does team mean to you? Give three things that you can do to help our team be successful this year. Name three goals you have for this season. What steps will you take to achieve these goals? What are three goals (non-basketball related) that you would like to accomplish this year in school? What would you like to be doing in five years? There are so many options to get your team thinking.

Journaling for campers (4th– 8thgraders) was similar, I just added questions that were a little easier to answer and to discuss if the girls wanted to. I used some questions similar to the ones above and added questions like: If you could travel anywhere, where would you go? If you could be an animal, what would you be and why? What is something that you learned at camp today? What makes you happy? Write about someone who is special to you. Share a time when you helped someone. How did it make you feel?

Whether you’re a coach or a player (or anyone really), try using a journal, take time to look inside and reflect on your life and see what happens.

WRITING PROMPT: Choose one of the prompts above and get writing!

I’ve read a lot of books about coaching basketball and over the years I have attended many coaches clinics and I love learning about the game and getting different perspectives. As coaches we have certain preferences, but it only helps to check out different options and opinions, and then pick and choose the bits and pieces that fit our needs. Whether we are talking about the X’s and O’s or overall team concepts, knowledge is power.

I am currently building a Coaches Toolkit page on my website with basic information for basketball coaches, such as free downloads of court diagrams, practice plan forms, and beginner basketball basics. The page will also include some of my favorite books such as The Complete Guide to Coaching Girls’ Basketball: Building a Great Team the Carolina Way by Sylvia Hatchell, Reach for the Summit: The Definite Dozen System for Succeeding at Whatever You Do by Pat Summitt and  They Call Me Coach by John Wooden to name a few. I will also be adding links to blogs and websites, and I’m looking for recommendations.So if you have basketball books, blogs or websites that you like, please comment below and I’ll take a look.

A friend asked me to help coach a 6th grade boys basketball team this fall. A couple of years ago I stepped down as Varsity Head Coach of the West Seattle High School girl’s program and I wasn’t sure I wanted to coach again, but when I stepped onto the court and saw the boys hustling across the floor at tryouts, I knew it was the right decision. When I got home, I went straight to my office, pulled open my coaching file and started planning. I scanned the first three documents in my coaching notebook, Westside Big 5, West Seattle Practice Rules and “10 to Win” Westside Rules of Defense, two of the three have nothing to do with basketball skills, a reminder to me of what coaching is truly about, teaching life skills.

Whether your players are in grade school or college there’s more to teach than just the fundamentals. Don’t get me wrong, I have coached for 25 years, and I love the fundamentals, I’m a stickler for the fundamentals, but I try to build a team mentality and have some fun along the way. At the varsity level there is an emphasis on winning, but what made our 2015 West Seattle team strong in the end, what got them to go undefeated in league and find success at the State level, was a belief in one another. This team mentality and positive attitude was backed with pride and sportsmanship. And, if you asked the girls, I believe they would say they are grateful for their experience and their teammates.

I’ll only have these 6th grade boys for a short practice once a week, and I will focus on the fundamentals and try to have some fun. But I also hope to instill a positive work ethic, teach sportsmanship and promote togetherness and pride for one another. Maybe only God or some higher being can do all that, but if I can touch upon some of it over the next few weeks than I’ll feel satisfied, then I’ll have done my job.

*Feel free to download any of the documents above and implement what you like into your basketball program. 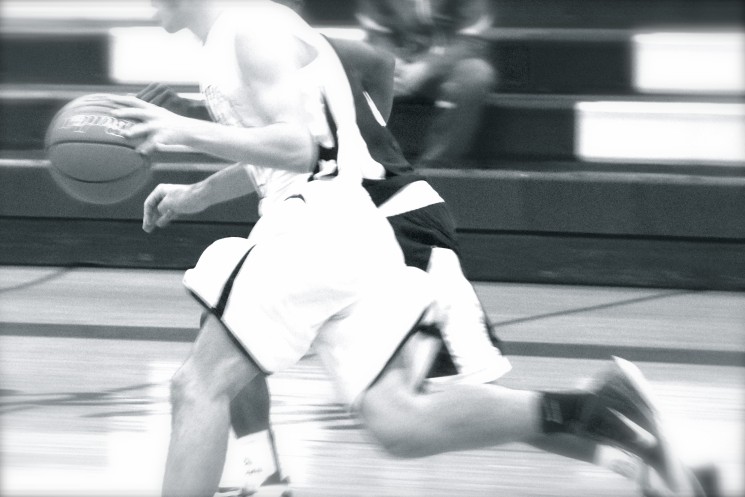 I love basketball, but sometimes these days I wonder what is happening to the integrity of the game. What’s up with all the cheap play and dramatic antics? I watch it happen in games at every level, professional, college, and high school, as well as in my women’s rec-league.

Are you wondering what I’m talking about?

Let me explain by giving you a few examples. Recently before one of my daughter’s college games, she rolled her eyes and said, “Wait until you see #44 from the other team. She flops during every play, trying to draw a foul.” And sure enough during the game, play after play; this young woman (and a couple of other women from the team) threw themselves to the floor, arms flailing. I found myself hollering at the refs, “She’s flopping! That’s not a foul! Are you kidding me?” I was annoyed and I wasn’t even the coach. It reminded me of when I was coaching at the State Tournament last year and my daughter was guarding one of the best players in the state. While coaching I had a front row seat, and I watched as the girl literally grabbed my daughter’s wrist, pulled it into her jersey and then threw my daughter’s arm to the sky, as she heaved her own body to the floor. My daughter got the foul. I consider this cheap, and awfully close to dirty. I was appalled.

Tuesday, at a boys high school game, I watched, as over and over, a point guard dribbled to the side of his defender, and while bobbing his head up and down he’d slow a bit and flail his body around in a way that I suppose was suggesting to the referee that he was getting fouled. To me it looked as if he was having a seizure, and I thought, really? Who taught this kid to do that? Why not just dribble around the player, cut to the middle of the floor and look for a teammate to pass it to, so we can score? Why all the drama? Just play ball.

Why cant we just play the game? Not look for ways to cheat it? So many players these days drive to the basket with one thing in mind, to draw a foul. Not to make a layin, or to stop and pop a nice jumper, or better yet to draw the defense and pass to a teammate. Players are taught to simply attack the basket, which can be a good thing, but many are out of control and looking for a bail out, a foul to be called. Just watch a game and see how often players who drive to the hole are leaning so hard into the defender with their head down, that there is really no way that they can even see the basket. By the time these players get near the hoop they are often parallel to the floor as they fling the ball up and flail to the ground. Is this really a shot?

Should all these antics be part of the game? There are those (even my husband at times) who argue that this is smart basketball. I wouldn’t call it smart basketball, I call it cheap basketball and it rubs me the wrong way. Unfortunately, I’m not sure that you can totally get rid of it, but it has made me happy to see more and more referees hold their whistle as they watch kids toss themselves on the floor, rather than calling a foul. So there is hope.

Am I getting old? Set in my ways? Maybe a little, but I love this game and to add this crazy drama, seems disrespectful. There is something to be said about having players and teams focus on helping each other and simply playing the game. Yes, you want to be smart on the court, step in front of a drive to draw an offensive foul, play hard and be strong with the ball when you go to the hoop, that sort of thing, but do we have to try to win an Oscar on every play? Let’s leave acting for the stage and just play good hard basketball.

This part of the season can get long, for both players and coaches. I’m not coaching this year, but my daughter reminded me of the fact yesterday (I’m visiting her at college where she is playing basketball). She said that she and her teammates are all really tired right now and having a hard time getting motivated. Suddenly I was transported back my years as a coach, and I remembered the look on the players faces, uninspired, distracted, anxious (finals were usually taking place at this time) and bored. They were burnt out and tired. Tired, not because they were out of shape (like my husband insisted) but mentally fried. It happened every year.

This was always the moment that I felt the urge to run them until they wanted to cry. Go all “old school” on them. (Which I did from time to time, a few extra sets of lines never hurt), but at this time of the year, when we were a week or two away from playoffs, I knew what the team really needed was some TLC.

Tender loving care is like a reboot when players are mentally tired of the game. The burn out tends to be worse with a team that’s been loosing a lot, but it happened to my high school team that went undefeated in league. Plain and simple, basketball season is long. A good hard practice is important, of course, but by this point in the year, I kept practices focused, quick paced and short. With one key addition…more fun. From team building activities, to team dinners, to half court shooting competitions (which goes against my grain a little but the kids always love it), I looked for ways to remind the players that basketball is FUN!