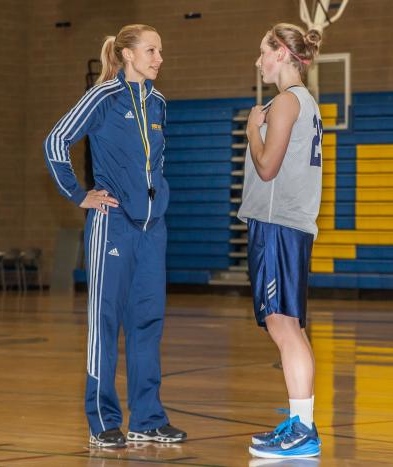 I’ve spent over half of my life coaching and every minute was worth it. Not for the money of course, I volunteered for eighteen of the years that I coached and the others I was paid next to nothing (As you know high school coaches don’t coach for the money). But it was worth it because of the opportunity to work with the players (mostly girls) and teach them about basketball, a sport dear to my heart, and through basketball help them learn about life. How to set goals, work hard, work as a team, win and lose with grace and also how to have some fun in the process.

Over the years, my players inspired me, entertained me, and taught me to be a better coach and a better person. But coaching high school was not easy, and though I am always up for a challenge, and loved having the opportunity to grow a high school program my last few years as a head coach, the part that is difficult about being a coach, is being treated differently or mistreated because I’m a woman.

I know the game. I played Division 1 college basketball and started on a team that played in the NCAA tournament and was a coach for a high school program that won several state championships before I became a head coach, so I have experience on and off the court. I also know and respect that not all coaches are the same. I ran flexible motion offenses where other successful coaches might run set plays, I don’t like 1-3-1 zones much, but have seen them run with perfection by other teams. What I’m saying is, coaches can do things their own way and be successful, however what I have found over the years, is that often times whatever a woman does, what offense or defense or subbing she implements, isn’t good enough in the eyes of uneducated parents.

Mind you, I had some parents who were amazing, parents who had my back. But I also spent all of my high school head coaching career fending off threats from parents and having to defend not only my knowledge as a coach but defend my character. It didn’t faze me if they didn’t agree with my coaching style, the accusations that I didn’t yell loud enough made me laugh. The claim that I didn’t defend their kids from the bad reffing (I choose to teach players to be respectful and ignore calls and to focus on the game) made me roll my eyes, but the slanderous email sent out to the public defaming my character and the ten-page letter that went to the governing body of high school athletics in our state with accusations of falsifying stats and mental abuse among other things, went too far.

And it didn’t end there. Letters and meetings and attorneys. All a waste of time for me and school administrators. All time that I would have rather spent on the court. And I am not the only one, the only woman, who has spent time defending their honor instead of time on the court coaching like they’d prefer. I personally know more than twenty women who have chosen to step down from coaching high school sports because of similar treatment. Not because they aren’t getting paid enough (though a bit more for high school athletics would be good), not because they aren’t successful, but because they are tired. Not tired of coaching, not tired of working, but tired of the abuse. Read more about what it’s like to be a woman coach in Tales of a Woman Coach by Bea Chang and support your high school coaches, male or female, because coaching and sharing our love of the game is what we live for.